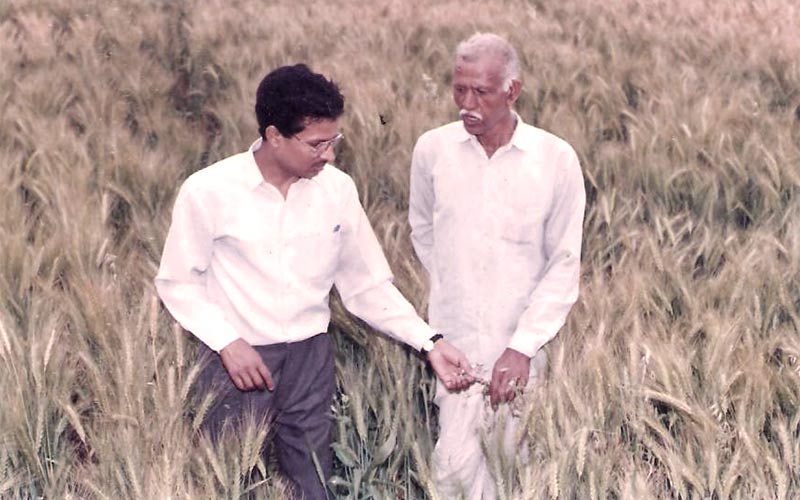 Along with the teaching-learning initiatives, he did his research in aromatic and medicinal plants in the hills and plains of Uttarakhand with the auspicious integration of Garhwal University and GB Pant University, Pantnagar. He received a Doctorate degree in soil sciences in the year 1988. After teaching Chemistry at Campus School as a lecturer in GB Pant University for 2 years, Dr. Mishra worked with Potash Research Institute of India (PRII), Gurgaon, Haryana for 5 years.

In PRII he worked as the editor for the Journals of Potassium Research and as an Extension-scientist. During this period he represented Indian scientists to disseminate the achievements on soil testing and crop production to International Scientists. In the year 1992, Dr. Mishra was honored with the “best paper” award by PRII, Gurgaon. Thereafter, Dr. Mishra was honored with first prize for Soil Research by the same. He made ever-lasting contributions in the fields of organic chemistry & agricultural science respectively. For his contributions, he was often awarded.

But being just a scientist wasn’t enough for him. He wanted to give back to the society something more, so that all individuals have equal opportunities to grow & find their rightful positions in the society. With the thought he developed his own team of open minded, compassionate & hard working volunteers to bring in potential quality improvement in the lives of the deprived people. That’s how “IMPART” was born.

Subsequent to this he resigned as a scientist/editor and found IMPART as a registered organization and associated himself with rural development, agriculture development, availability of safe drinking water in rural and urban areas, family planning, maternal and child development, employment generation, women empowerment and many other objectives.

Dr. Mishra worked as a Chairman and Director of IMPART for 10 years. He not only earned strong recognition in the state of Uttarakhand but also in the states- Uttar Pradesh and Punjab. Under the direction of Dr. Mishra, arrangement of safe drinking water, women empowerment, child development, capacity building and training was initiated in 100 Gram Panchayats of Lucknow, 98 Gram Panchayats of Agra, 50 Gram Panchayats of Udham Singh Nagar and, 11 Gram Panchayats of Shahranpur, Rampur and Muradabad. In order to provide safe drinking water in rural areas, overhead tanks, mini-pipelines for water supply and hand pumps were constructed. For sanitation, toilets, drainage, sock pits and CC road etc., were constructed. Dr. Mishra not only trained his staff but also trained the functionaries of other NGOs. He was well known for his unique style of imparting training.

He was a justice loving, talented and had an extraordinary personality. For his immense contributions as an active citizen, people always looked up to IMPART for their various needs, as his soul lied in the organization. A legendary man, he fostered thousands of lives in the areas of North India. As the time is passing by we are reaching more & more untouched areas of this service & strengthening/empowering the lives of rural & urban Indians.

May God Bless His Noble Soul and May He Keep an Eye on us through the Heaven above!